Helping in Times of Crisis:

Israel Around the World

In the past few years, a different side of Israel has cropped up in news reports. It's the Israel that flies an entire medical facility (complete with x-rays and an operating room) with more than 200 personnel to earthquake ravaged Nepal. The Israel that quietly brings Syrians injured in the country’s civil war into Israel for treatment. The Israel that builds a field hospital on the Gaza border during Operation Protective Edge to care for Palestinian civilians.

But why does Israel enter into these arenas, which are ostensibly outside of its responsibility and purview. Is Israel responsible for civilians in Syria and victims of disasters in its region and around the world? 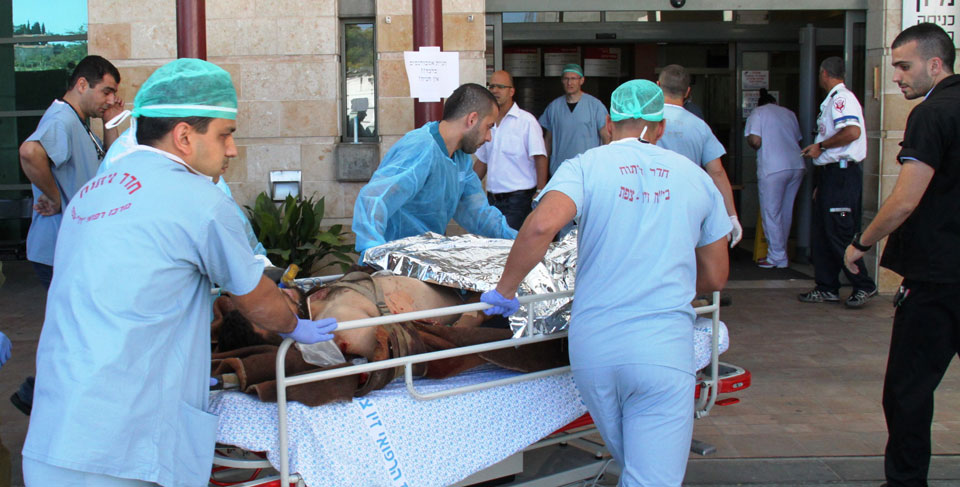 Introduction: For Whom Am I Responsible?
Many Jews teach children from a young age to view tikkun olam – the Jewish concept of repairing the brokenness of the world – as being their responsibility. While the task may seem overwhelming, our tradition teaches that the enormity of the task should not dissuade us from tackling injustice one piece at a time.

As it is written in the Ethics of the Fathers (Pirkei Avot 2:16): “Rabbi Tarfon taught: 'It is not your responsibility to finish the work [of perfecting the world], but you are not free to desist from it either.'”

In order to begin the conversation on the ways in which Israel views its responsibility to others, you may want to have your students explore what Judaism teaches about responsibility and helping those in need, using the texts below:

When the community is in trouble, a person should not say, "I will go into my house and eat and drink and be at peace with myself."

The Holy One Blessed be He, created humans in such a way that every man needs help from those around him and it is rarely the case that man can take care of himself alone and he always needs others’ help because this is how God created him, that man is incomplete on his own and each one completes the other, everyone has their own experience.

All Israel is responsible for the other.

The following three quotes come from figures outside of the Jewish tradition but relate to the quotes above.

Only a life lived for others is a life worthwhile.

The best way to find yourself is to lose yourself in the service of others.

When I was a boy and I would see scary things in the news, my mother would say to me, "Look for the helpers. You will always find people who are helping." To this day, especially in times of "disaster," I remember my mother's words and I am always comforted by realizing that there are still so many helpers – so many caring people in this world.

Questions to have your students consider:

Section One: Traveling Around the World to Help
This section will focus on Israel's responsibility to individuals outside of its immediate sphere of influence. This will explore the motivations and rationale for engaging in life saving military missions in areas that usually do not have a direct impact on Israel.

On April 25th, 2015, a devastating 7.8 magnitude earthquake hit Nepal, killing more than 8,000 people and injuring more than 19,000. A day and a half later, Israel’s first humanitarian delegation left for Nepal. The delegation of 260 people included medical personnel, search and rescue experts, and other relief workers.

According to Israeli President Rivlin:

This delegation of 'messenger angels' represents the universal values, in the spirit of our people and our country.

This is the true face of Israel - a country that offers aid over any distance at such moments.

By April 29th, Israel’s makeshift hospital in Nepal was up and running, including two operating rooms, four intensive care rooms, and 80 hospital beds. Staffed by 150 Israelis, it was the largest field hospital ever built by the IDF. In the 11 days it was open, it saw more than 1,600 injured people, performed 85 life-saving surgeries, and delivered 8 babies. (For more information, see this article from Israel21C.)

This article from the Jerusalem Post gives an excellent look into the first days of the Israeli mission in Nepal. The article also includes a four-minute video showing how the field hospital was assembled, and at minute 2:35 includes a speech (with English subtitles) from Col. Dr. Tarif Badar, the Head of the IDF’s Field Hospital.

Some might suggest that Israel’s response was expanded due to the presence of thousands of Israelis trekking through Nepal, particularly in the years immediately after their army service. Yet, its reaction to the disaster in Nepal is no different from its reaction to other natural disasters, including the 1999 earthquake in Turkey, the 2010 earthquake in Haiti, the 2011 Fukashima disaster in Japan, and the 2012 tsunami in Thailand.

You might want to screen this two-minute CNN report on the Israeli field hospital established in Haiti after the devastating 2010 earthquake in order to provide context for appreciating Israel’s commitment to providing humanitarian aid.

Section Two: Treating Wounded Syrians
This section deals with an exceptional case of Israel taking responsibility for people who are not only outside their purview, but the citizens of a country that Israel is technically at war with.

Over the past decade, Israel has been helping severely wounded Syrian children and adults, some of whom are fighters in that country’s civil war. In certain ways, this highlights the extent to which Israel is willing to extend a helping hand:

One source for more background on the Syrian Civil War is a BBC report entitled Syria: The Story of the Conflict.

Helping "Under the Radar"

During Syria’s bloody civil war, Israel has provided safe passage to hundreds of Syrians who sustained injury in the conflict, bringing them to Ziv Hospital in Safed, where they have received life-saving medical care. For the most part, this has been done “under the radar” – with little fanfare or media attention – for fear that too much publicity might cause the Syrian authorities to prevent civilians from reaching the UN-administered border crossing point in the Golan Heights. Even when media coverage is allowed, it does not identify the Syrians by name or even show their faces, in order to minimize the likelihood that recipients of care will be penalized or punished when they return home to Syria.

The following video – recorded at the Ziv Hospital in Safed – details the treatment that the Syrian civilians and fighters received, along with the reactions from members of the hospital staff. Please note that some of the content may be upsetting to younger viewers, please use discretion when screening it:

While your students may have questions of their own after watching the video, you may also have them consider: