The Effects of PTSD on Children and Society

In the U.S. nowadays, we mainly hear about the effects of post-traumatic stress disorder (PTSD) on soldiers returning from Iraq and Afghanistan. In Israel, PTSD is widespread among Israeli and Palestinian civilians as well, especially after Operation Protective Edge (2014). For the hundreds of thousands of children who experienced armed conflict on a regular basis, the war is never really over. 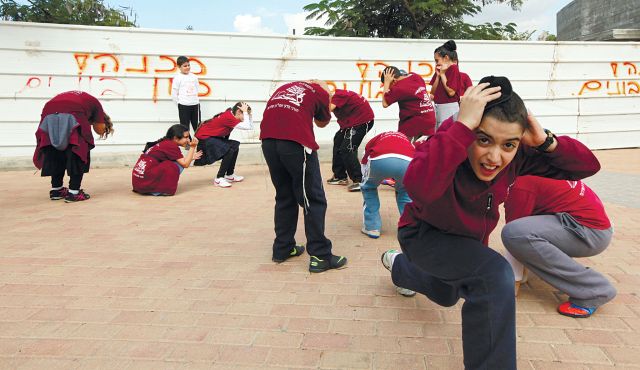 Core Learnings
Post-traumatic stress disorder (PTSD) is a condition with lifelong consequences, that affects human beings of all ages. It derives from and sometimes feeds into ongoing war, terror, and violence.
Children often bear the brunt of war and conflict.
It is possible to empathize with people suffering from PTSD without assigning blame for the circumstances that led to their trauma.
Key Questions
How might/may being a witness to violence change someone's personality, psyche, or outlook on life?
What are the lifelong consequences of trauma and how do individuals and a society as a whole help address them?
How/can I feel empathy for those on the other side of a conflict?

Section One: The Butterfly Effect and The Diameter of the Bomb
Sometimes, what seems like an isolated event can actually have far-reaching implications. This can be the case when someone experiences trauma, and it can impact how we view events.

You may want to begin this section by having your learners reflect on times that they've been stressed. Maybe it was before a test or a big game, or maybe it was something more intense like a car accident or the death of a loved one. Stress is a natural part of life. Often our reaction to stress will be brief and we will move on. However, if the stressful event is intense, ongoing, or very traumatic, there is a risk of developing post traumatic stress disorder (PTSD).

While your students may want to share examples of times they've felt stressed, it's fine if they don't wish to share. What's important however, is for your learners to understand the difference between a stressful episode and a kind of intense trauma that can lead to PTSD.

One image you may want to use to describe the type of trauma that can lead to PTSD is that of a pebble being thrown into a pond. When a pebble lands in water, it creates a ripple effect. It doesn’t just sink to the bottom of the pond, it creates ripples throughout the water. Here is a great (and short) visual of the ripple effect:.

a cumulatively large effect that a very small natural force may produce over a period of time.

[1980–85; so called from the notion that the fluttering of a butterfly's wings may set off currents that will grow into a large storm]

The Israeli poet Yehuda Amichai examines the butterfly effect of trauma in "The Diameter of the Bomb."

The Diameter Of The Bomb

The diameter of the bomb was thirty centimeters

and the diameter of its effective range about seven meters,

with four dead and eleven wounded.

And around these, in a larger circle

of pain and time, two hospitals are scattered

and one graveyard. But the young woman

who was buried in the city she came from,

at a distance of more than a hundred kilometers,

and the solitary man mourning her death

at the distant shores of a country far across the sea

includes the entire world in the circle.

And I won’t even mention the crying of orphans

that reaches up to the throne of God and

beyond, making a circle with no end and no God.

Yehuda Amichai was one of modern Israel’s most important poets. Born in Germany in 1924, Amichai moved with his family to pre-State Israel (Palestine) in 1935. He volunteered in the British Army during World War II and later served in the Israeli army as well. His poems deal with love, war, death, and the details of daily life. They are written in very down-to-earth language, containing many references to traditional Jewish liturgy and symbols. His books have been published in 40 languages. He died in 2000.

Amichai’s poem begins in a very technical way. He describes the bomb itself and the damage it caused. There is no emotion or humanity at the start.

The bomb that went off started a chain of events that far exceeded the 30-centimeter diameter.

Section Two: Understanding PTSD - Examples From the United States
What is post-traumatic stress disorder (PTSD)? Learners, individually or in small groups, can go online to research PTSD. Ask them to come up with a definition of PTSD and six symptoms that may indicate that someone is suffering from PTSD. If the learners creates a chart of symptoms, they can use their findings later to assess the symptoms they identify in other situations. (If you have no online access, below is a list of symptoms that will facilitate your discussion).

Posttraumatic stress disorder manifests itself in a number of different ways:

A PTSD sufferer may relive the traumatic events in flashbacks, or may have upsetting dreams and significant distress when reminded of the events. He or she may experience depression, anger, and guilt, or have angry outbursts and experience trouble concentrating or sleeping. For example, a simple car backfiring can remind someone with PTSD of a past battle.

There is a great deal of discussion in the United States about war veterans who suffer from PTSD. Often soldiers feel isolated and misunderstood when they come back from combat. There are a number of successful programs that work with those veterans.

This video clip from 60 Minutes looks at PTSD in veterans: http://www.cbsnews.com/news/the-war-within-treating-ptsd-2/ (14 mins).

PTSD in Children and Sandy Hook

While PTSD in military veterans has received increasing attention in recent years, and treatment methods have been developed to address the needs of former combat soldiers, society speaks less about children who suffer from it. Nevertheless, there are contexts in which children experience trauma that can linger and cause continuing distress.

For some background on the 2012 shooting at Sandy Hook Elementary School, see this video clip: https://www.youtube.com/watch?v=X6oY_VujQBk (2:48).

Carrie Lendroth Battaglia’s first grade daughter was in the classroom next door to the class which suffered the most casualties from Adam Lanza’s shooting rampage. At a certain point during the shooting, Carrie’s daughter and many of her classmates were moved into the bathroom inside the classroom.

Here is an excerpt from a letter Carrie wrote about her daughter to the Newton Action Alliance after the event:

She heard everything. Shooting. Screaming. Pleading. She was sure she was going to die that day and did not want to die for (sic) Christmas. Each time she hears a loud or unfamiliar noise, she experiences the fear she had in that bathroom.

All of her classmates have PTSD. She struggles nightly with nightmares, difficulty falling asleep, and being afraid to go anywhere in her own home. At school she becomes withdrawn, crying daily, covering her ears when it gets too loud, and waiting for this to happen again.

If they created a chart of the symptoms they identified in their online research, they can use that chart to identify symptoms in Carrie’s daughter.

Israeli children, specifically those living in the southern part of Israel, have spent the past decade under the constant threat of rockets and missiles being launched from Gaza. Alarms, called Tzeva Adom (red alert) go off, allowing people between 15-90 seconds to seek shelter before the rocket or missile lands. In the summer of 2014, thousands of rockets and missiles were launched from Gaza reaching as far as northern Israel. The message seemed to be that no place was safe.

Palestinian children have experienced bombs being dropped in their neighborhoods. Many have been near bombs as they have dropped. They have seen Israeli soldiers enter their cities and watched helplessly as their cities turned into combat zones. They have lost loved ones to war and have attended funerals of family members or friends.

Israeli society has become accustomed to taking care of citizens under siege. When missiles come from the north, people in south and central Israel open their homes and schools. And similarly during the 2014 conflict, when southern Israel was the hardest hit, many Israelis came to friends and family in the north to get away from the constant sirens and fear they wouldn’t reach shelters in time.

A number of initiatives have been developed to address PTSD. Among them:

In response to the constant barrage of missiles and sirens, Israeli teachers developed a song for their young students to sing as they went down into bomb shelters so as to distract the children from what was going on overhead.

The movie "Rock in the Red Zone,” a documentary about Sderot and how the residents have coped with rocket fire over the years, includes an exploration of the power of music to help young people process their fear and powerlessness.

Helping children express themselves through art can help them process their feelings and find healthy ways to express them. A non-profit group, Artists 4 Israel, developed Healing Arts Kits that were widely distributed: http://blog.eretzyisrael.org/post/94725558125.

Children in Gaza have been focusing on sports.

One way to cope has been through talking about their feelings. 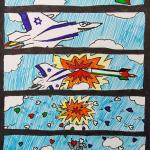